The house, built in 1952 and designed by Austrian engineer, Frederic Herz Schwarzkopf, is one of the only remaining examples of modernist architecture in central Wellington.

A quiet retreat in central Wellington

Built for the Collins family, Douglas Lilburn was its second owner. He lived there from 1959 until his death in 2001. The house is surrounded by a garden of mature and native trees, which Lilburn called his ‘jungle’. It provides an ideal working environment for a composer. It also has a fine vegetable garden, established by Douglas Lilburn, which supplies the resident composers with a variety of produce. During Lilburn’s time there it became something of a mecca for artists, musicians and especially composers.

The house is distinctive for its black and white exterior and flat roof – houses such as this are often known as ‘magpie’ houses. It offers 3 bedrooms – one of which is usually the composer’s work room, a generous lounge, kitchen, laundry and bathroom. The modernist details extend to many built-in cupboards and shelves and also its design, which ensures as much sun as possible in this sometimes shady part of Wellington.

Early in 2006, Heritage New Zealand gave the property a Category 1 listing in recognition of its historic associations, outstanding cultural value and architectural interest. Further details are available on their website.

A covenant taken out by the executors of Lilburn’s will protects the garden and grounds. The house, together with the shed and garden, is also noted on the Wellington City Council’s district plan as a heritage site.

The land is almost 1100 square metres, unusually large for this area of Wellington where most of the houses are 19th century cottages on small sections. 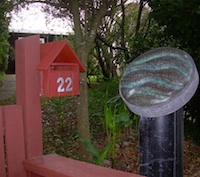 A plaque designed by Tanya Ashken was commissioned by the Lilburn Trust and has been placed at the gate. It reads: Douglas Lilburn ONZ, New Zealand composer and professor of music lived here 1959–2001.