Douglas Lilburn (1915–2001) is widely regarded as New Zealand’s most distinguished composer. His influence on his contemporaries and succeeding generations of composers is far-reaching. 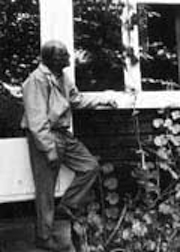 He is generally recognised to be the first composer to base his professional life in New Zealand. His works, which include pioneering electroacoustic music and a large number of chamber and orchestral works, continue to be performed and recorded across the world.

In 1984 he established the Lilburn Trust, which continues to support New Zealand music by funding projects and awards, such as annual student composition prizes in universities. Proceeds from the sale of his house in Ascot Street went to the Lilburn Trust.

In 1988 he received New Zealand’s highest honour when he was admitted to the Order of New Zealand.

The Lilburn Trust supports an official website for Douglas Lilburn.

His music can be researched, purchased and borrowed from SOUNZ, the Centre for New Zealand Music.

Douglas Lilburn: his life and music, an award-winning biography by Philip Norman was published in 2006 by Canterbury University Press.

Events were  held all across New Zealand and in other parts of the world to mark Lilburn's 100th birthday.

Michael Brown, music curator at the Turnbull Library,  has done a great roundup of many of the events.